Efflorescence is different things to different people. To the manufacturers, it's an insoluble problem; to the contractor, it's something else the client can blame on them; to the homeowner it's a white-ish discolouration that can appear to be like a powder or like the soapy scum seen on dirty bathwater, while to the chemist, it's most easily described as Calcium Carbonate with lesser quantities of other carbonate, sulphate, and chloride salts. The bulk of efflorescence seen with concrete paving is Calcium Carbonate, whereas for clay pavers, the main component is usually Sodium Chloride - table salt - along with sulphates and some carbonate. The remainder of this section focuses on Calcium Carbonate efflorescence observed on concrete products, as that is the most common form.

In simple terms, Calcium Carbonate is a by-product resulting from an interaction between the cement used to manufacture the paving and the natural environment, which includes the ground, the weather, and the atmosphere. The result is a deposit or 'salt' that appears on the surface of the paving. There's no single, definitive appearance - it is sometimes powdery, sometimes scummy, sometimes it's hazy and indistinct; sometimes it's sharp, crisp and obvious. Sometimes it covers large expanses or paving, sometimes it affects individual units, and sometimes it affects just half or two-thirds of a paving unit. It seems to affect dark hued pavings more than those of lighter tones, but the truth is that it's just more noticeable against a darker background.

However, it's always white-ish, although it might be a grey-white or a bluey-white, and it always spoils the looks and the colouring of the paving. It may seem to disappear when the paving is wet – this is due to water turning the efflorescence salts temporarily transparent rather than actually removing them. Once the surface dries out, the efflorescence salts usually re-appears.

Concrete is made using cement, and cement is made from limestone. Consequently, all concrete pavings contain a quantity of lime, or Calcium Oxide (CaO). Better quality paving materials are manufactured using a better quality concrete, which usually has a higher cement content relative to 'budget' products, and so, perversely, efflorescence can affect the better quality products more severely than the 'economy' alternatives. Some manufacturers try to work around this by replacing some of the cement content with alternatives, such as Pulverised Fly Ash (PFA), which 'sets' much as does cement, but contains little or no lime. However, PFA is difficult to colour, so while its use may reduce the problem of efflorescence, it can increase production costs because of the higher levels of colouring agents required.

As the concrete cures, some of the mix water reacts with the cement to produce Calcium Hydroxide, which, being water-soluble, can be transported to the surface of the paving unit during the curing process, and when the water evaporates, the Calcium Hydroxide is left behind. As curing of concrete is a long, drawn-out affair that goes on for weeks or months (long after the concrete itself appears to be “set”), the chemical production of Calcium Hydroxide continues, although it does 'tail off' as more and more of the original Calcium Oxide is hydrated. This is known as Primary Efflorescence, defined as efflorescence occurring as a by-product of the manufacturing process. It usually (but not always) appears pretty evenly over the entire surface of affected units.

The key 'ingredients' needed for efflorescence to bloom (as it is known) are Calcium Oxide, Carbon Dioxide, and Hydrogen Oxide (more commonly known as water). The extent of any efflorescence is largely determined by the presence of more or less of these key ingredients, and certain atmospheric conditions that can speed up or slow down the chemical reactions involved.

While the vast majority of the Calcium Oxide will come from the paving itself, it may also be present in the laying course material, especially where a mortar, concrete or other cement-bound bed is used. Similarly, water comes not only from precipitation, that is, rain and snow, but also from the ground beneath the paving, from the atmosphere (as dew), from washing the car, or from watering the lawn, as well as being a vital component of the original concrete. The Carbon Dioxide is ever-present in the natural atmosphere, but there may be environments where levels of CO2 are higher or lower than normal either due to local natural phenomena such as vegetation, or managed environments such as curing chambers.

How does it disappear?

The tiny pores and voids within the concrete matrix through which the soluble Calcium Hydroxide is transported eventually become plugged with deposits of the insoluble Calcium Carbonate. This effectively blocks the escape route for the Calcium Hydroxide and 'locks in' any further reactions, forcing them to take place below the surface and, conveniently for us, out of sight. 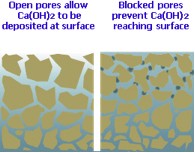 Simply walking over or driving on the paving will abrade the deposit, wearing it away and reducing the quantity visible on the surface.

Although we know that rain can dissolve and wash away the soluble products of efflorescence, it can also wash away some of the insoluble material, in the same way that sand or other detritus can be washed from a surface. Other weather phenomena, such as wind, snow, hail, etc., can also accelerate the removal of both soluble and insoluble matter. Rain that is slightly acidic is better able to dissolve the deposited salts, and so the problem may disappear sooner in urban areas than would be the case in rural locations.

How long will it last?

This is the tricky question. No-one can say how long any incidence of efflorescence will last. It might be a few weeks; it might be a couple or three months; it could be a year or two. There are so many factors affecting its generation and appearance, and its disappearance that an educated guess is the best we can manage. We know that certain conditions have an effect: damp, shady sites can be more adversely affected than open, sunny sites.

However, such an answer doesn't do a lot to dispel the legitimate concerns of the homeowner. They've handed over a big wedge of money for a patio or driveway and it looks, to be brutally frank, bloody awful. Judging from the feedback received, most cases of efflorescence become noticeable 3-6 weeks after laying is completed and then last for 3-6 months before gradually disappearing over a period of 3-6 months. It seems that most people never notice it coming – it just 'appeared' overnight - and most don't notice its departure: one day, they realised that it's no longer there and they'd almost forgotten all about it.

These figures are averages: it lasts as long as it does and it goes when it's done.

Can it be shifted more quickly?

Any 'chemical' treatment needs to be considered very carefully and tested on a discreet area before daubing it all over the rest of the paving. Many of these products are based on a mix of detergents and acids that 'eat' or 'dissolve' the insoluble carbonate and allow them to be washed away. However, some acids may also react adversely with pigments used to colour concretes and can result in alarming colour changes. Further, they can actually exacerbate the problem by un-plugging the blocked capillaries and micro-pores which then allows the Calcium Hydroxide to find its way to the surface once again. Although stone products tend not to be affected by efflorescence, they may be used in conjunction with or adjacent to areas of concrete or clay paving, and acid-based products may cause dramatic discolouration or damage to the stone.

There's a whole range of different sealants, but for the purposes of this discussion, they can be divided into two camps: those that form a 'film' on the surface of the paving (Miteq Sealer 201/202), and those that penetrate and form a more considerable barrier extending several millimetres into the paving (Miteq Sealer 102/103/104). Those sealants in the 'film' camp are generally ineffective against efflorescence as the process continues and the carbonate material is deposited beneath the thin layer of sealant. The penetrative types tend to be more successful because they block the pores of the paving near the surface, thereby limiting ingress of water and carbon dioxide, and egress of calcium carbonate, which often remains trapped within the paving unit.

Efflorescence is a natural phenomenon and is best left to resolve itself. It's not pretty but it doesn't actually do any long-term harm to the paving and in the vast majority of cases it will be over and done with in a few months.

If it's really annoying you, a stiff brush, clean water, Miteq Cleaner 304 and elbow grease is the best option. Proprietary cleaners and 'efflorescence removers' are, at best, temporary fixes but can improve the appearance in the short-term. Sealants are best left until the problem has cleared up.

Complaining to suppliers, manufacturers or contractors is unlikely to achieve anything. The better companies and tradesmen do what they can to minimize the problem but it really is impossible to eliminate. If you think you've found a way to resolve the problem, either to clear it up once and for all, or to prevent it happening in the first place, you should contact me immediately and I'll tell you how we can share the fortune we'll make!

We can be found at: